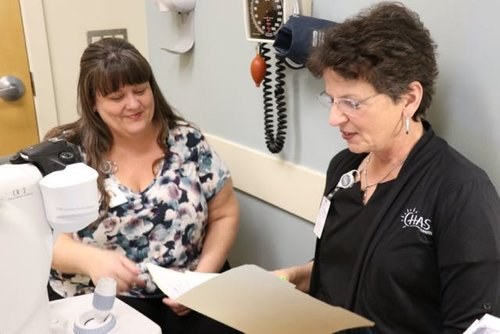 This dynamic duo, Bev Christie (left) and Joana Rogers, has become a winning team against all odds.

You will not believe this story, but it’s absolutely true – we couldn’t make this up! The chances that Ioana Frunza, Infrastructure for Railroad engineer in communist Romania, would become Joana Rogers, Medical Assistant at CHAS Health (CHAS) in Spokane, are one in several million. What Joana has accomplished since she got there in late 2016 - and accepted the role of primary photographer in the diabetic retinopathy (DR) screening program a few months later - is almost as unbelievable. She doesn’t do it alone; she gives great credit to her supervisor, Bev Christie, Clinical Services Specialist. But, if ever there were proof that the secret to a successful DR screening program can lie with just one individual, CHAS owns that story. And if ever there were an individual with a story worth telling, it’s Joana.

We’ll make the history lesson brief. Remember the Berlin Wall? Remember when it came down in 1989 and Eastern Europe underwent a transformation from communism to freedom? Imagine you knew someone in one of those battered countries, a place where a thousand people had already been killed in an effort to end the dictatorship. Let’s say that person you know is Ioana, college educated, working in the important Department of Transportation. Like her father before her, Ioana is part of the team that designs railroad bridges.

A World all New

Then the Wall falls and Romania, along with its neighbors, experiences “the opening to the West.” The dictator and his wife, following a short military trial, have been summarily shot. The world is all new for Ioana and her countrymen, and her line of work, transportation, now requires the important review and renewal of international agreements. The Minister of Transportation needs help in English and French translation, and so Ioana has a new job. And just guess who the Minister of Transportation happens to be: Traian Basescu, future two-term president of Romania!

It was her freelance work on weekends, though, that introduced the biggest change in the life of our young, enterprising subject. Translating on her own, Ioana chanced to connect with a trade mission based in the United States, in the Northwest, in fact. And there, in Pullman, Washington, right on the Idaho border, a young American named Brett Rogers wished to negotiate some agricultural deals in Eastern Europe. But he needed a translator. Enter: Ioana. And – uh, yes, they fell in love and lived happily ever after. (We told you we couldn’t make this stuff up!)

Okay, there were a few steps in between. Brett traveled to Romania and its near neighbors to investigate the options, and he met Ioana in person. Imagine! Next Brett needed Ioana’s translation services for an entire week to interact with the Ministry of Agriculture, the Chamber of Commerce, and so on. What an opportunity for our story to develop! You know how this will end: one year of phone calls and letters (quite tricky in a country where US stamps were coveted by the neighborhood children, who were not above intercepting anyone’s foreign mail), then a tourist visa for Brett to return to Romania, the marriage proposal, and finally a “fiancée visa” for Ioana to visit the United States. “I came to know whether I wanted to stay or go back,” she said. “I wanted to meet his family and get to know Brett better.”

She got to know him better, and she liked what she found. Ioana chose to stay and became Joana Rogers. She worked for a metal fabricator as an estimator and then as a quality control inspector. She did filming for a toy company in San Francisco. She worked ski patrol on Mt. Hood, provided translating services for a school district, and finally, following Brett’s career wherever it took him, Joana ended up near Spokane, inspecting railroad bridges in the breathtaking Palouse. (Well, perhaps not as breathtaking for Joana, who carried her own water and food, not to mention a laptop and a bucket to sit on and all the documentation she would need to meet with contractors in 100-degree heat.)

“When my husband retired early from Washington State University,” she says, “I decided to follow my heart at last. I wanted to make my living helping people. I had decided to become an ophthalmic technician,” she continued, “but by then the program at Spokane Community College had been closed. So I entered the Medical Assistant (MA) program. In 2014 I graduated, and I got to do my externship at an ENT clinic!”

As a nationally certified Medical Assistant, Joana chanced to find a local optometry practice with nine employees – three of them pregnant and planning maternity leave! (Again, we couldn’t make this up!) She had her job – for a while. 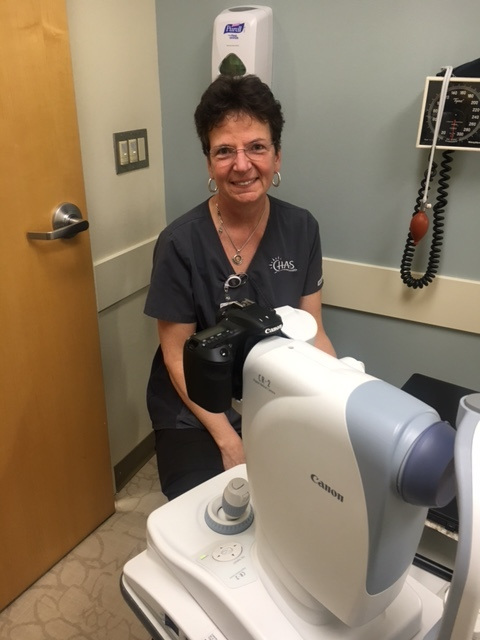 “Two years later, I saw the announcement for a DR screener at CHAS. I was familiar with the health center and really wanted to help the less fortunate. It was an easy decision.” The decision wasn’t all Joana’s though. She had interviewed for several jobs by then, and it was clear that her accent and her struggle with English were working against her. Bev Christie could hear the woman behind the accent though. “I owe Bev all my happiness now,” Joana says, “for trusting me so I can do what I love.”

A Medical Assistant for CHAS since December 2016, Joana is able to provide a variety of patient care, including blood draws, (to check that important A1C level) and immunizations. But her passion is reaching as many diabetes patients as possible with the sight-saving message: Diabetic Retinopathy can sneak up on you, with no observable symptoms, and take your sight. But, if you have your retinas examined annually, we can catch it while it’s still treatable. You don’t have to lose your vision to diabetes.

CHAS Health was ready for Joana when she joined the DR screening program in February of this year. They already had a well-established “traveling program” by which their digital retinal camera was transported among nine sites in Washington and Idaho. Joana just had to follow the camera and find a new patient population at each stop. In some cases, the patients would be all scheduled and, speaking a variety of languages, show up on time for their sight-saving screenings. In other cases, she would have to work hard to convince patients at various sites to come in for a screening while she – and the camera – were available. And sometimes she’d have to reschedule no-show patients. In each case, Joana embraced the opportunity to help others using her love of optical science.

What if No One Speaks their Language?

Just as important, though, Joana found this new job called on her facility with languages. Many immigrants get their primary care at community health centers, and, in the Spokane area, they come from all over. Of course she can translate for Romanian-speaking patients and employ her French for the older Vietnamese population. “I’ve also learned to conduct the basic eye exam in Russian and Marshallese,” she offered. But it was Spanish that gave Joana pause. “I had tried several times to learn Spanish,” she explained, “but I was always using outdated books that had nothing to do with healthcare. For example, learning ‘Maria is carrying a basket on her head’ did not help me in the health center.”

So, having read this far into our most unlikely story, what do you suppose Joana did?

Why, she enrolled in a free online course offered by the Spokane Public Library: Medical Spanish. She took 12 lessons over six weeks, passed the final exam, and got her diploma. “My biggest satisfaction was when I was able to schedule a patient appointment over the phone with a Spanish-speaking patient,” Joana said. One of her co-workers overheard the conversation and remarked, “I didn’t know you speak Spanish,” and Joana said with a smile, “I didn’t either.” 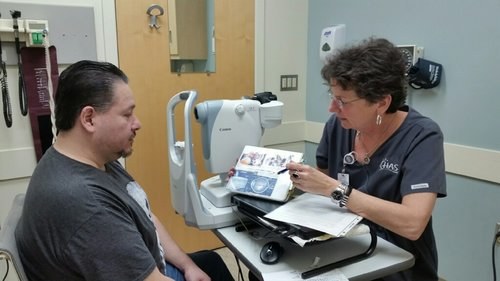 Joana is not fluent in Spanish, “but I can ask and answer questions and do the educational part.” Ah, the educational part, the final surprise in this unlikeliest of tales! You see, not only does Joana have a love for saving eyesight and using her languages – she also has a passion for delivering practical, useful education to her patients, no matter the language. “I find the anatomy of the eye as fascinating as the universe,” she said, “and many patients thank me for showing them a cross-section of the eye and explaining the stages of diabetic retinopathy. I hope to transmit to patients my enthusiasm for their eye health. I treat them as I want to be treated. I would want to know why it is so important to return to the clinic each year for a retinal screening.”

Joana developed her own educational materials. And she also developed a little flyer to be handed out to each diabetes patient who is in the clinic for some other concern and is due for a DR screening. It encourages the patient to go to the front desk before leaving the clinic and schedule that all-important test for the next time Joana and the camera will be in town. How does Joana know who needs to be given that flyer on any particular day? “At the beginning of the day, I print a list of all diabetes patients coming in for any reason that day. Then, working with other MAs, we examine the list and determine who should be offered a retinal screening that day. Those who choose not to have it are given the flyer.”

The Benefits of Serving Others

Who benefits from all this language facility and educational passion? Joana thinks she does and, in explaining, she uses yet another language: “After all, the old Latin saying, ‘docendo discimus,’ is still true: By teaching, we learn. Sometimes, in educating patients, I get questions I can’t answer, which makes me do research and learn even more in this field.”

Such an amazing attitude and level of commitment do not go unnoticed. One very appreciative individual at CHAS is Joana’s supervisor, Bev Christie, who is responsible for the DR screening program. “When she first started with us,” Bev says, “Joana spent many hours at home writing down for herself the different steps required to perform and document the retinal exam.”

But there’s more to the story, according to Joana. “Bev was so patient with me as I struggled in the early weeks. And she didn’t mind repeating things as often as I needed them repeated.” 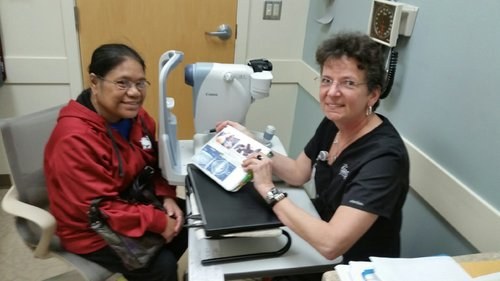 A patient from the Marshall Islands learns about the progression of DR thanks to Joana's determination to educate patients.

Bev picks up the story: “After taking the Medical Spanish class on her own, Joana actually sought out a co-worker to teach her enough Marshallese to communicate with diabetes patients from the Marshall Islands. She wants to inform her patients all about the progression of retinopathy so they will continue to see her annually. She always follows up on the reports we get from EyePACS and makes sure patients get their results and referrals. She’s a joy to work with – always thoughtful of others, going above and beyond expectations and treating patients just as she would like to be treated.”

Just the other day, Joana discovered a church in North Spokane with a significant Marshall Islands population, including many youth with perfect English who translate for their elders. It occurred to her that some of those elders might have diabetes, which might be silently stealing their vision. So Joana provided copies of a short message in Marshallese about the importance of yearly DR screening for all those with diabetes, along with her medical director’s invitation to the community health center. “Some might not even know we exist,” she explained, “yet our sliding fee scale can make DR screening affordable for the uninsured.”

Now, that last part of this amazing story isn’t surprising at all, is it?